The Evolution of the Vardo and where did it begin?

I think it’s time for a response to some of the correspondence generated from the Vardo known as the Snail that is chronicled on this blog.  It’s my home on the road and a big part of my life.

Ready for the Road.

First of all, thanks for all the positive comments and discussions started by this odd-ball pet project of mine.  I was hesitant enough even starting it much less chronicling it on the web for all-and-sundry to see.  As far as the detractors go, I don’t really mind well-thought-out comments that criticize the wagon but needless commentary on how it “should have” been done is really a waste of space here.  I won’t compromise my design to fit someone else’s idea an RV they want to have.  Build one, show the world, we’ll all be inspired in that way.  (And no, I will not build one for you at this time.  You can buy this one or steal my plans for free).

As the vardo passed 4 years old this month and comes up to it’s 20,000 mile mark, some changes are in the works.  Nothing too major.  Just tidying up the loose ends and finishing all the bits that never happened.  It’s time to reassess.  New siding, some windows, lots of finishing touches to make it more livable.  Updates to follow.

So where did this project begin?  Long ago, while pondering the cargo trailer and pickup truck I owned and thinking about rolling homes I read the book English Gypsy Caravan: Its Origins, Builders, Technology and Conservation by Cyril Henry Ward-Jackson and Denis E. Harvey and I thought it would be great to tow something like this behind a truck.  It showed the design of the vardo in all it’s glory.  Unlike the BenRoys, the “slouchies” and teardrops I had considered the old fashioned “showman” or “Gypsy” vardo had a classy look and feel that a woodworker can appreciate and all the amenities of home, if rather spartan for some tastes.

The question was: Can I make this work at highway speeds?  It seemed unlikely but I am hard-headed.  The internet was no help at that point as I couldn’t find anyone with a similar design online so I looked to the library.  Little help there but there was plenty of information documenting old-time wagons if one were willing to chase down the leads.  And so it began.  The more I looked at the plans, the more I thought this could really work. 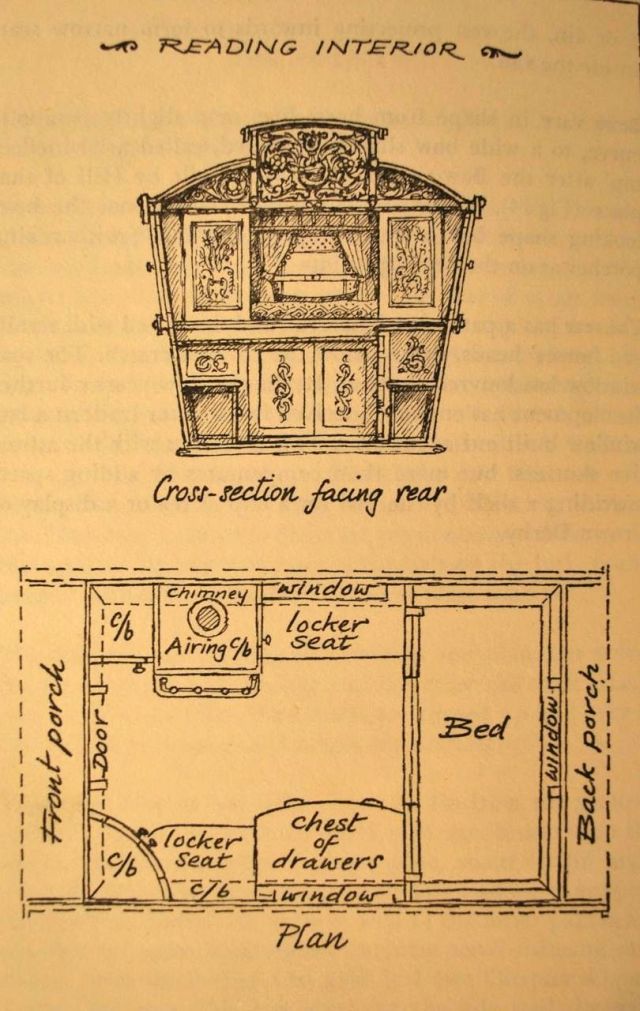 I am a firm believer in looking to the past for solutions.  Maybe it’s the skeptic in me but I think most of our modern answers are based on what someone wants to sell us, not what is the right way to do something.  I’m not against innovation.  But how can I improve on a layout like this?  Remember, most real living is done outdoors, not confined in the house.

I admit, I dumbed down the 19th century workmanship to fit a modern time and financial budget but the inspiration was there.   From these drawings, my home was born.

More sketches, the evolution of the design and more of this babble can be found on the “Sketches” page or a complete photo log of the build can be seen HERE.