There are quite a few images from the Golden Age of the Gypsy Caravan* floating around the web, many without appellation.  Still, they have much to offer the potential traveler or yearning nomad today.

I quite like seeing the nearly universal items one needs for living on the move such as the folding tables, water coolers, wash basins, buckets, and lanterns.  If I were to guess, I’d say this one was taken in some muddy side-alley in southern England around the beginning of the 20th century. 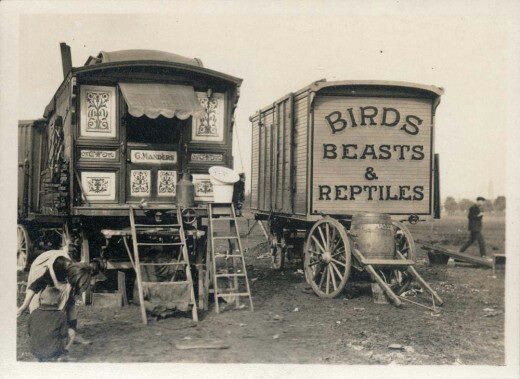 And let’s not forget that a large market for the high-end and custom wagons was for professional showmen, another group living on the road.  I have kept the above image in my stock because I really like the awning over the door.

I think one of the appealing aspects of these wagons is their almost timeless flavor.  An image from the 1950s at the Appleby Fair looks much the same as one from 1985 or 1895 with the addition of an occasional automobile.  The Open-Lot design above is out of favor with the modern American crowd due to the lack of security but I can see the advantages on a warm summer day.

*”Gypsy” has fallen out of use due to the pejorative overtones when applied to the people known as the Roma or other Travellers (sic).  In terms of describing the living accommodations it is kept here for historical purposes, for the time being, for lack of a better universal term.