Here’s a simple shoe design that was made by our ancestors before there were shoe shops or Zappos.  Much of the Europe population, both male and female wore a variation of this for many millenia, right up into the early 20th century.  They are commonly associated with their Celtic cousins in Scotland, Wales, and Ireland but they are essentially the same as the simplest Roman carbatina.  Essentially, it’s a basic European shoe.

I made a set of these around 1986 with a little instruction from an Eighteenth Century reenactor and loved how simple they were to make.  My experience up that point was with Native American style moccasins the difficulty I had with sewing in those days.  This was a perfect option for me and I find that it is a popular class when I offer it as an introduction to leather working and moccasin making.

While this isn’t exactly a tutorial, it does provide the basic information necessary to get started on a pair for yourself.  I would suggest a pattern to be cut from heavy cloth before diving into cutting valuable leather just to get the fit right.  It’s a forgiving design so, 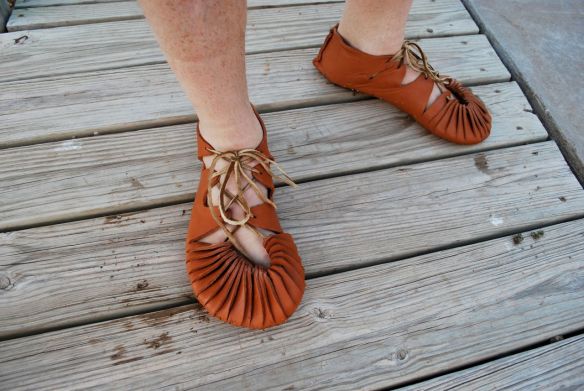 after wetting and shaping

And finally, six years later, they still function well.  The soles are getting thin so it’s almost time to renew them.  Fortunately, a pattern can easily be made and adjusted from the old pair by wetting them, letting them dry flat, and using that as a starting point.